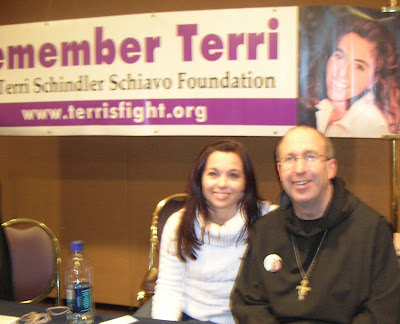 It was a week to remember, Holy Week 2005. We watched two well-known people die publicly. One died with dignity while the world prayed outside his window, Pope John Paul II. The other died in agony, forcibly dehydrated while those who loved her suffered every pain with her, but could not, by law, give her a drop of water, and some of us prayed outside her door.

She was Terri Schiavo, and the world must remember her murder so that this won't happen again. Therefore, an educational program will be instituted leading up to March 31 the day of Terri's death, each year, to remember what a man is capable of doing to the woman he pledged to stand by "in sickness and in health".
Posted by Leticia at 12/11/2007

Thanks for the reminder..