Making the March for Life Part of your Family 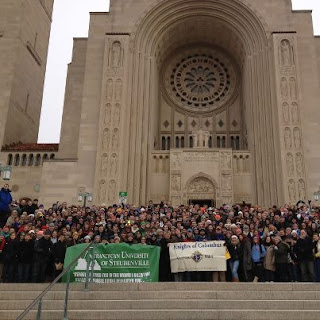 I saw her for the first time in the Hart Building where our New York Senators had their offices, mounting the marble staircase. Last year, we ran into each other at the Maryland House rest stop on 95. I have seen Barbara, my mother’s childhood friend, in or on the way to Washington DC for the March for Life reliably every year. You could bet on it. 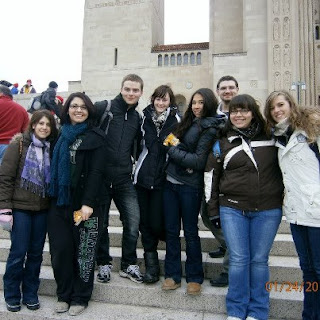 It struck us as one of the quirky benefits of having pro-life activism embedded in your family’s culture. We have family friends who have moved to Virginia whom we expect to see as we round the bend from Constitution Avenue to the Supreme Court. We hold a happy reunion for a few minutes or many, depending on the weather. We feel at home among the impressive white buildings and help one another find rallies and masses, rest rooms and lost friends. We congregate at the Hyatt Regency Capitol Hill on New Jersey Ave where the March for Life has a convention and pro-life displays. We sit down anywhere we can, the floor, pull our chilly hands out of gloves, gratefully sip coffee and talk about church and pro-life celebrities we have seen and whose cameras might show us to the folks at home.
Other memories stand out. . . in 2004 I was interviewed on my opinion John Kerry’s Catholicism by Japanese TV. I would love to see if they dubbed it in Japanese. Just before Hillary Clinton announced she would run for Daniel Patrick Moynihan’s senate seat in New York State I told the intern he had posted in the hallway with a clipboard., she dropped the clipboard in shock and said, “She IS! Heck, I’m movin’ to Canada!” then looked around sheepishly to see who overheard her.
It is strange to reflect how much one can have a sense of community in a group of half a million activists from around the nation. But I have been coming to the March for Life since my teens, with a brief break in my self-centered post-college years.
I first came on the March for Life 1977, at 15. I rode with a friends’ parish bus. Together, Monica and I had started the pro-life club at our high school, Our Lady of Mercy Academy on Long Island. We were warmly greeted by the elderly and middle aged ladies on the bus, “Its nice to see young people join us”. Now, ahem, much older, I am the middle-aged lady who once again stands out in the crowd, now transformed and multiplied many times into a boundless, energetic sea of youth. 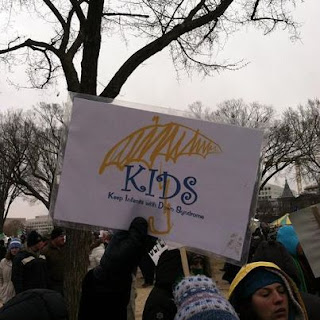 Most times my family comes down in different busses. I often take Amtrak and attend functions before and after the March, my girls prefer to ride with friends. We always tried to meet at some point. Particularly poignant in retrospect is 2009, when I was beginning my apostolate KIDS Keep Infants with Down Syndrome. My mother, 73 brought 12 year old Isabella with her and met the new group thanks to cell phones, on the Mall. She walked with us to Capitol Hill where she promised to send greetings to a Sister of Life from her mom. It was mom's last year on earth, but she was at the March nine months before succumbing to cancer. God bless her spunk!
This year, stuck home with the flu, Christina and I scan the crowd on EWTN looking for Gabbi who attended with Franciscan University and Bella who went with our parish youth group. They met by chance at the Basilica. One more of those happy coincidences pro-lifers seem to count on.
My KIDS group, bravely led by co-founder, Eileen Haupt, whose hand holds the sign in this photo, marched on without me, and this photo made it to the Washington Post blog. Even if I never make it again, part of my legacy will always be marching for life.

My response
“They said we’d never make it. They’ve been trying to put limits on us on you, on me. . .” he says thumping his hands together for emphasis, “on US!”

That gorgeous, well-dressed man luxuriating in front of the fire has it for you. He wants you. And the next woman, and the next one. And he can get you all, all the women he wants.

Do you know why?

Because of his devoted spouse, Roe v Wade. He is married to the promiscuity made easy by his friendly neighborhood abortionist, otherwise known as the clean-up man.

Abortion makes it possible for him to use you as an object, to love and leave you without having to be a father to his sons and daughters. If you choose to abort, he’s off the hook, the government may pay for it and, for him they’ll be no reminder of the intimacy he shared with you. If you choose to give birth and raise the child, he can throw choice in your face. After all, you had a choice to ‘get rid of it’, now you can live with the consequences. You can be sure he won’t. Why do you think he laughs so heartily? He’s playing you for a sucker. He takes another sip of his expensive cognac.

Soon, he’ll be giving a red rose and that sexy smile to the next conquest. You’ll be raising his child alone, dealing with poverty and the anger of fatherlessness, or worse, agonizing over an aborted baby.

“And we’re going to be standing by your side today, tomorrow and in the years to come.” Whose side will he be standing by? It’s not you.

Don’t be fooled by the charm. He’s not talking to you, he’s in love with his own pleasure. He’s only inviting you to share the fire for a few minutes, until he’s bored with you. The momentary physical pleasure he enjoys thanks to Roe v Wade and the abortion industry. That’s what he is in love with.

A Nation Rises - March for Life

In my local Social Security office on Dec 31, I was greeted by a cordial security guard as I entered and instructed how to use the kiosk to generate a ticket with my number on it. This was followed by 15 minutes of awkward silence where twenty strangers ignored each other in a tiny waiting room.
I took a chance and broke the silence with a bold comment, "sir, excuse me, are you carrying a firearm?"
"Why, yes I am." he answered, unruffled by my audacity.
"Do you want a job protecting my daughter's elementary school?" I asked.
He laughed and agreed.

A lively and friendly discussion about the events at Newtown ensued, with all the participants agreeing that armed security at elementary schools was an idea whose time had come.
The security guard mentioned that the reason he was armed is because of Oklahoma City bombing where over 20 children's lives in a day care were cruelly ended. I mentioned that we should learn the same lesson where 20 children's lives were just as cruelly taken.
A woman added gently that there needs to be improvements in how we help the mentally ill. The fact that she was not disagreeing but just adding an aspect to the discussion was interesting. The news media makes this a name calling, hostile guns or mental health standoff. Meanwhile, I agreed with her citing my background as an MSW student at Fordham Univ where I studied the disastrous social policy of de-institutionalization of the mentally ill over 40 years ago and how it not only created the homeless crisis but made our streets unsafe as its nearly impossible to commit someone who is mentally ill against their will. The funds which were slated to provide halfway houses for long term institutionalized patients who were not ready to be thrown out on the streets with nothing more than the phone number for a social worker and a prescription for their schizophrenia.
My friends and I, with nothing more than a BA in Psychology, were case managers for these poor souls in the early 1980's. It was a burnout situation, my friend's client killed his father and she felt responsible, but she had over 50 such clients, and all she could do was get them to the clinic for medication refills. I helped them when they were in crisis, homeless, without meds or food, but they needed more supervision. I left Catholic Charities after only two years, took some time in Europe to find myself, and returned to the US determined to be an English as a Second Language teacher. At least immigrants could be helped, I argued. The mentally ill situation is hopelessly stuck by immoral bureaucrats who pilfered the money which would have fixed the system by creating halfway houses in the old state institutions.

The lady in the Social Security Office worked at Transitional Services, one of the few halfway houses on Long Island, where I was working. It was built in the buildings of Pilgrim State Hospital, and provided exactly the type of services which the severely mentally ill require. Would that Adam Lanza had been able to reach help in  time to prevent the tragedy of Newtown.
The security guard and I discovered we both had special needs daughters who attended the same Catholic school.
We all parted on friendly terms.
Its a small world and a lot friendlier when you take a chance to foster dialogue rather than punditry.