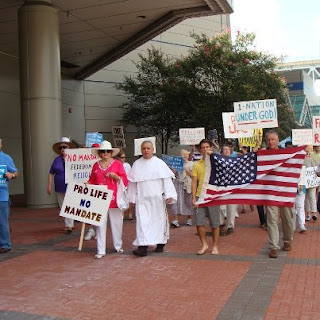 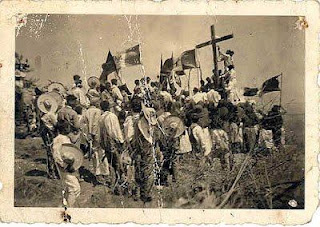 The Cristeros of the 1920's Mexico who stood up to their President's suppression of religious freedom are the example we can follow as we oppose the Obama Administration's mandate to Catholic organizations to provide birth control and chemical abortions to their employees.
Looking at these two photos on Facebook, I couldn't help noticing a certain similarity. Of course the modern group of protesters are not carrying arms. Will they have to someday soon? Pray for a peaceful victory for the freedom of religion, we didn't get it in the Supreme Court, so now its up to us in the ballot box.

The Fortnight for Freedom was only the beginning 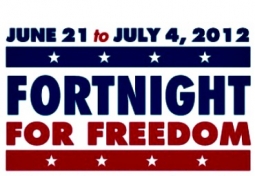 Catholics need to wake up from the illusion that the American we now live in; not the America of our nostalgia or imagination or best ideals, but hte real American we live in here and now- is somehow friendly to our faith.
What we're watching emerge in this country is a new kind of paganism, an atheism with air-conditioning and digital TV. And it is niether tolerant nor morally neutral.
Archbishop Chaput.


We have put away the flags and cleaned up after the fireworks. But we must not forget our nation needs us now more than ever. This is no time to get lost again in a media induced haze and let our vigilance lapse.

The Fourth of July was especially poignant this year as it marked the end of the Fortnight for Freedom  and a shocking Supreme Court decision which did not overturn the Affordable Care Act (Obamacare) left us deeply disappointed in the power of our government to correct itself. What the Supreme Court did was put that responsibility squarely on our shoulders. Like it or not, we the people have the type of government and the leaders we deserve. If we want better, it will take effort on our part. Lots of it. 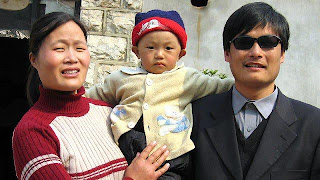 Congressman Chris Smith (NJ-R) has long been a valiant defender of the rights of the oppressed, from those enslaved in international trafficking, to the rights of the unborn. I was honored to speak with him and his wife Marie recently at a reception in New York after a screening of "For Greater Glory". Freedom was on everyone's mind after that stirring film, and I felt it was particularly fitting that one of its greatest advocates was present at the reception. Congressman Smith had just welcomed Chinese human rights activist Chen Guangcheng as he arrived in the United States, thanks to his efforts.Chen was the blind advocate of women who were victims of the horrible Chinese One Child Policy, funded by the Obama administration via UNPFA.
I thanked the Congressman for his uncompromising stand on pro-life issues, and he reminded me of the work that his wife, Marie Smith does in the Parliamentary Network for Critical Issues.  On yesterday's  episode of "Defending Life" on EWTN , Mrs Smith said that her organization works to help governments around the world defend against forces which will try to impose abortion upon them, with the help of US funded organizations like Marie Stopes and International Planned Parenthood Foundation. Mrs Smith said that the only bulwark against this mounting pressure from the abortion lobby is religious belief. This explains why President Obama, Kathleen Sibelius are attacking the religious beliefs of the Catholic Church with regards to contraception and chemical abortions. Its only the thin edge of the wedge, soon we'll be persecuted for opposing abortion and so called same sex 'marriage'. Our Catholic beliefs on moral issues are the only barrier to a world completely surrendered to the Culture of Death not only in America, but throughout the world. Its a huge responsibility.
We are the gatekeepers of  the rise and fall of our current civilization. God has put us in this position in His wisdom by His design, so we can be confident that He will provide the grace we need to succeed.  We must not shirk our duty by pursuing today's version of bread and circuses; video games, reality TV, junk novels, and social networking gossip. Its time to become involved, and the good news is that its easier now than ever before. Today anyone can have an amazing impact on the culture in three simple steps:


Put down the TV remote, unless you are watching EWTN.


1. Pray- millions of Catholic school children prayed for the conversion of Russia, and the Evil Empire fell without firing a shot. Prayer is fuel for the good fight and all we are trying to go relies upon Divine assistance. Remember the battle is not against flesh and blood but against powers and pricnipalities, don't enter into battle unarmed.

2. Learn- I worked in Adult Education most of my life and I know that its never too late to pick up a book like Fr McCarthy's "God Bless America, God's Vision or Ours?",
Cardinal Dolan's ebook True Freedom: on Protecting Human Dignity and  Religious Liberty,
Bill Donohue's Why Catholicism Matters.,
or  Michael Coren's Why Catholics are Right.

3. Act-Go on Facebook and Twitter and Share everything you can about religious freedom, Obama was elected thanks to these social networks. We need to use them too.
Get active in a pro-life politician's campaigns, attend a religious freedom rally, sign petitions, and read the website Stand Up for Religious Freedom.

And talk, talk about religious freedom, we need the media to pay attention to this battle. We are the Church Militant, Christ's Body on earth, and we must defend our freedoms before the Culture of Death has tightened the noose as it did in Mexico, commandeering Catholic institutions and arresting protesters and our priests.
Watch the trailer of "For Greater Glory" to see what could lie ahead for us if we remain passive.


All that is required for evil to triumph if for good men to do nothing.
Edmund Burke

No Controversy? Facts for Melinda Gates