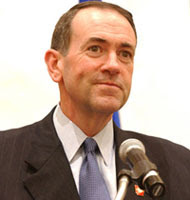 To say that Mike Huckabee is a stranger to national politics explains in part, his recent blunders with regards to the Catholic voters he insulted with his recent trip to Pastor Hagee in Texas. There isn't much of a Catholic voter base in his home state of Arkansas. Here he is in his own words, discussing his relationship with Catholicism with Deacon Keith Fornier on Catholic Online.
“First, let me say I have appreciated that Catholics led in the pro-life issue and were firm on this even before the Baptists. Before the Baptists really started taking a strong position on the sanctity of life, I was a part of an organization called "Southern Baptists for Life" which was launched to move our denomination to a more consistent pro-life position."
I just love the humility and honesty of this statement, as well as the pithiness of this one,
In short, if I held any animosity toward Catholics, I don't think Justice Scalia would have ever taken me up on my invitations to go duck hunting.
You have a point, there, Huck!
HT Spirit Daily
Posted by Leticia at 12/31/2007

I like the way Huckabee responds to difficult and controversial questions. He seems to be honest and humble, too, unlike many politicians.

I'm also supporting Huckabee. I don't understand why more conservative Catholics are not backing him, and I'm very upset with Brownback for suporting McCain. My gut told me to support Huckabee even over Brownback and now I know why.