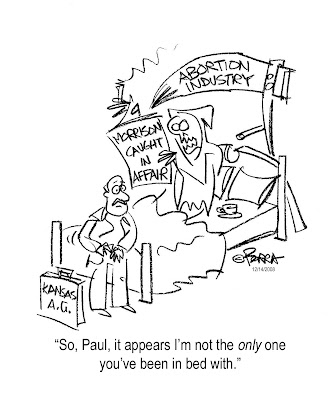 From cartoonist John Francis Borra
Under pressure from both friends and foes, including the state's self-serving pro-abortion governor, Kathleen Sebelius, Kansas attorney general Paul Morrison resigned from office Friday, Dec. 14, just five days after admitting being sued by his former mistress and staffer for sexual harassment. He leaves amid very credible claims he has tried squeezing information from her about Johnson County Attorney General Phill Kline's ongoing investigation into illegal activity at Planned Parenthood of Kansas and Mid-Missouri.

But such revelations should surprise no one. What is one to expect of a man whose campaign for the Kansas attorney general's office was financed by the abortion industry? Notorious late-term abortionist George Tiller was just one anti-life contributor, funneling one million dollars in blood money to smear incumbent AG Phill Kline in last fall's battle. The axis of death quite literally purchased the state's highest law enforcement office and Morrison wasted no time whitewashing Tiller's manifest violations of Kansas law.

While admitting marital infidelity, Morrison turned the rhetoric up full-blast, vowing "to continue to fight for the safety and security of Kansans to the best of my ability." But why would anyone have believed such nonsense? Could a man with so little regard for his family have any more regard for the welfare of John Q. Public?

And what about "the safety and security" of the uncounted girls and women whose victimization Morrison perpetuated by absolving out-of-hand George Tiller and Planned Parenthood of systematically covering for rapists? Bought and paid-for, Paul Morrison shielded Kansas' notorious abortion industry to the end-- at the expense not only of young women, but of a future without their children!
Semper veritas!
John Francis Borra
(cumulus@eaglecom.net)