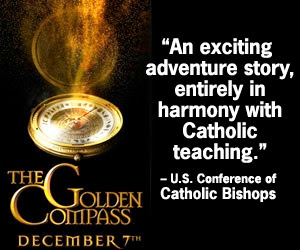 The review he authored of "The Golden Compass" has been pulled from the USCCB website. Now, Catholic leaders like Fr. Tom Euteneuer of HLI have called for his firing.

At the risk of sounding self-serving since I am a film critic, I think that it's time to disband this office. It served well in the days before the internet, as I said before, my mother relied on it, however, it has lost it's moral compass, and is no longer reliable. I don't have faith in much that the bishops do as a body these days, after the weak message on pro-abortion politicians, so, let the marketplace of Catholic film reviews take over, and abolish the office altogether. Let people go to me at Mercatornet, or Steve Greydanus, at Decent Films Guide, Jeffrey Overstreet, or the blogs, to find out if the film they're interested in is objectionable for the children, and why.

By the way, the USCCB Office of Film gave "Enchanted" an AI rating, and I gave it an AII. due to inappropriate sexual content; in a fairy tale. My insight that this movie would spark good mother-daughter discussions about the nature of romance and marriage after the film was appreciated by mother and Catholic blogger, Kathryn Gerold-Miller, who said, " As always, Leticia Velasquez has pointedly detailed some of the points parents should look for in preparation for their post-viewing discussion with their children."
Harry Forbes gives the impression that he has no family, or any idea of what sort of material is inappropriate for adults, let alone children. This is a constant temptation for film critics, to become enamored of a particular film's style, or plot, or acting, forgetting to look for objectionable moral content. Did you realize, that until the late 1960's the US bishops were THE moral authority of Hollywood? Their thumbs down would automatically sink a film.
How far we've fallen!
Posted by Leticia at 12/12/2007

I think what is KEY here is that WE are paying for Mr. Forbes salary (unless he happens to be doing this for free).

In the free marketplace of ideas, I think the time has come, (INDEED IT'S LONG OVERDUE) to tell the bishops to disband the office... that we do not intend to pay for a ratings guy who is easily wowed by cinematography and has little to offer in the way of a moral compass when it comes to films.

How very Christian to call for a man to be fired — jus before Christmas — because we disagree with his outlook on things. That outlook may not be universally accepted by Catholics, but is surely not alien to a significant constituency of Catholics.

Why do you presume that your outlook should enjoy a monopoly in the Universal Church?

Would Jesus cheer you on in your brutal crusade against a presumably decent man? Or would He condemn you as a Pharisee who is doing as much damage to the Faith as Pullman's books?

Gman: Your implication is that because an outlook is “not alien to a significant constituency of Catholics” that it therefore ought to be taught with the authority of the Bishops. I will remind you that Our Lord instituted not a “constituent democracy” but an apostolic hierarchy which is ordained to serve US, the faithful (that is you and me brother). If I wanted to be a constituency, I would become a protestant and then have a chance to “vote” on the actions of my “pastor”. But, NO! I am Catholic, which is a far more universal thing than “democracy”. Democracy can also be “mob rule”. We Catholics have something superior to “mob rule”. We have Sensus Fide. A good read of Canon Law will explain this further for you.

Yes! Jesus (AND CANON LAW) would approve of the action because we do not have a false sense of Charity in this matter. Because Jesus loves Mr. Forbes, Jesus would not want to see Mr. Forbes become an obstacle to the eternal salvation of himself or others. Sometimes, the CHARITABLE thing to do is to SAY NO. Fortunately, there are now (thanks to the break in the stranglehold of information due to the internet) many good Catholics who know the difference between entertainment, scandal and heterodoxy, and out and out lies. As Bishop Sheen once said, it will be the laity who will bring many in the Church back to Jesus after the experiment of modernism has proven to be bankrupt.