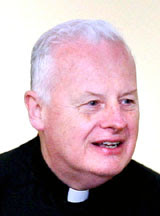 Creative Minority Report has an excellent post about this wonderful priest whom I was fortunate enough to have as my pastor for two short years, and am happy to see as the Rector of our Seminary. Monsignor takes the salvation of souls very seriously, when I first came to his parish, he mentioned Satan in the first two homilies I heard. I told him that HE was the main reason I had moved to St. John's.
He is gone seven years now, however, he comes over to surprise us when things are slow in the Seminary and gives us one of his rousing homilies, where he walks into your pew, and screams into your face, "you've got to go to confession to save your immortal soul!!!" No one has ever stayed asleep during his homilies!!
First Saturday devotions, Eucharistic Adoration, and long lines at the confessional are his enduring legacy to us. He's a St. John Vianney in the confessional, ready to put on his purple stole at the slightest mention of the sacrament. Once, on the way back to the rectory on his day off which he used to visit his parents, he 'felt guilty' for taking the day off, and stopped to hear confessions at the local hospital. For Msgr. McDonald, nothing was as refreshing as hearing souls come back into a state of grace.
His devotion to the Holy Eucharist is legendary. Once, at a Family Conference, he broke down in tears trying to explain the beauty of Christ's Real Presence. A fellow priest asked me, concerned, "is he all right?" to which I replied, "he always gets like that when he's talking about the Eucharist, that's why we love him". I heard from a friend, that in Monsignor's latest parish, St. Matthew's, an Extraordinary Minister dropped a Sacred Host on the floor during communion. Monsignor, dropped to the floor, consumed the Host, and LICKED THE FLOOR where it had been. A Jewish man observed this and decided to become a Catholic on the spot, saying, "this man REALLY believes that Jesus is in the Host".
Our Bishop, William Murphy has said of him, "he is the priest I admire most, he is like a grandfather figure to all the youth of the diocese. " "That is why he is now rector of the seminary, because Monsignor McDonald has a PhD in priesthood."
Our diocese has a bright future with Monsignor McDonald in charge of forming new priests.
Posted by Leticia at 6/04/2007

What diocese are you in?! He is on fire for Jesus!

We're in Rockville Centre, just south of you on Long Island. Our diocese has a bright future, now that we have a great seminary rector!

Leticia,
Thanks for sharing this! Sounds like an amazing man. I love priests who are not afraid to give the hard hitting homilies. I have heard of the wonderful things happening in the diocese of Rockville Centre. We still have lots of work that needs to be done here in the upstate, but we continue to pray.