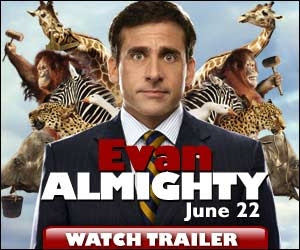 My girls have been after me to see this film, but I found myself dragging my heels, because of my negative impression of Bruce Almighty. I evern passed up an opportunity to go to a preview for pastors and youth ministers because I hated to go to a preview of a film I expected to dislike. Burce Almighty had several moral lapses( the fact that he was living with his girlfriend, and the sexual content made me wary of a sequel, but, after seeing the ad with a positive review by EWTN, I thought I'd give Evan Almighty a chance.
Steve Carrell is funny as Evan the news anchor who had the job coveted by Jim Carrey in Bruce Almighty, wins a seat in Congress, and his upgrading his life as he moves his wife and 3 sons to Virginia. The first day of life as a Congressman introduces Evan to internal politics, as he is asked to sponsor new legislation, making him miss a family outing. His wife wisely advises Evan to ask God for help in his new position, since his campaign slogan was "change the world", and Evan complies, displaying his ignorance of things spiritual in his inept prayer.
God, however, is quick to

respond, as Evan finds to his dismay, and make demands of him. He is to build an ark, fill it with animals, and warn the world of a flood at noon on September 22nd. Will Evan be willing to put his new job, and even his marriage in jeopardy to do God's will?
Evan Almighty may be a bit predictable, but it has plenty of laughs (about 6 unnecessarily rude jokes ) but no profanity, or disrespect of God. There are references to Scripture, including the Ten Commandments which weren't present in the more New Age God presented in Bruce Almighty.
Aside from the predictable Hollywood values ( the highest virtue is seen as conservation of the environment, and the disclaimer that the original Flood wasn't about punishment for sin) Evan Almighty had some good clean fun, amazing special effects, and a great soundtrack (thanks to the Passion's John Debney). The girls ages 5, 10, and 14 enjoyed the movie, and so did their mother.
My favorite line was a surprisingly Catholic bit of wisdom which God (Morgan Freeman) imparts in a chat Evan's wife(Lauren Graham), who is upset that her husband has been acting strangely. He reminds her of her prayer for family unity by saying, "if you prayed for patience, I wouldn't just give you patience, I'd give you an opportunity to learn patience. . . "
I recommend Evan Almighty for family viewing with slight reservations for fleeting inappropriate humor. View trailer here.
Posted by Leticia at 6/23/2007

Leticia,
Thanks for the review. I am tempted to see just so that 'religiously themed' movies will get support in the future. If it is a total flop, studios will become even more wary.

I'll take what I can get.

I saw this movie on one of the movie channels the other night. It was a real hoot! I also loved that part where the wife was told she was given the opportunity to bring her family closer together through this challenge. Watching the animals follow him two-by-two had me in hysterics. "Green groups" take their message to a form of cultishness and it gets annoying when it is the big moral message of a movie, but there is something to our being stewards of the earth, a message Pope Benedict is clearly following. I will definitely have my kids watch this. (My husband thought it looked too silly and went to watch a ball game on another tv set.)