The Secularists are Sharing Secrets

Not that this is surprising, since they have the same boss, but it's amusing to see the other side mirroring itself halfway around the world. Bishop Thomas Tobin of Rhode Island is being threatened for his criticism of Rudy Guiliani's pro-abortion position, and threatened with revocation of his tax-exempt status by People for the American Way.

Over in Australia, Cardinal G 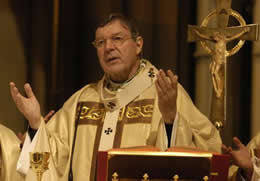 eorge Pell, is being similarly threatened for his remarks that Catholic politicians who support infanticide should not receive Holy Communion. I love Pell's response, it's a model for bishops.
“In a free society, anti-Christians like the Green, Lee Rhiannon, have every right to express their views,” Cardinal Pell said.
“However, there is a whiff of Stalinism or perhaps only of Henry the Eighth in her attempt to use this referral as a ‘warning’ to me.
“I respect parliamentary procedures and would be privileged to appear before the committee if necessary, to resist this clumsy attempt to curb religious freedom and freedom of speech.”
Source: New Oxford Review

Let's make it crystal clear to our critics, before we find ourselves in the camp of the compromisers. If we start equivocating, we will have to answer at the end of our lives before the Judgement Seat of Jesus Christ.
WE WILL NOT BE MOVED FROM OUR DEFENSE OF HUMAN LIFE AND
OF THE SACRED BODY AND BLOOD OF JESUS CHRIST!!
Posted by Leticia at 6/18/2007

These shepherds are true heroes. We must continue to pray that they will stand strong against the enemy.

This blog, and my letters to the editor are my actions.

I didn't mean YOU. I meant them.

Years and years of talking. These politicians are calling the Church's bluff...and getting away with it.