Confessions of a Lifetime Pro-lifer

As part of a research project on stem cell research and politics, I am going to be answering questions regarding life issues. I have decided to share some of the answers here.
The first question asks me to describe my pro-life activism since the 1970's.
In 1975, when I was in 7th grade, and Roe v Wade the Supreme Court decision legalizing abortion throughout all 9 months of pregnancy was two years old, I had two single women, the Didwell sisters, as Catechism teachers. Since we were an all-girl class, and the curriculum was vaccuous, they used the opportunity to tell us the horrors of abortion. I have never lived one day since then without thinking a 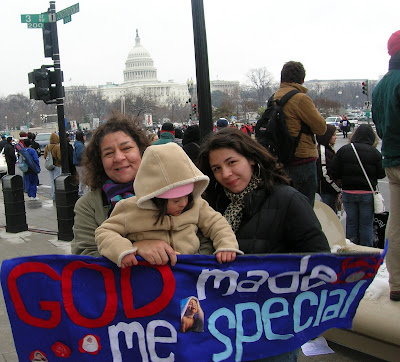 bout how many thousands of children are killed each day. Only now that I have lost three children to miscarriage myself, I often think about the emotional scars of the mothers as well.
I began my pro-life activities by going to local pro-life protests, and then to the March for Life in Washington, DC on January 22nd, commemorating the Supreme Court decision.
In high school, a friend and I began a Right to Life Club to educate fellow students and promote activism, but the nuns discouraged this type of activism, instead having us make decorated soaps to bring to a Nursing Home at Christmas. They didn't seem committed to the pro-life cause, and dampened the effect of the club. We went to Washington anyway, with our parishes, and local pro-life fundraisers.
My activism took a hiatis in the busy days of college and graduate school, though I again went to a Catholic college, there was no pro-life group. I would speak out in defense of life in discussions, and inform myself about the issues, but I suspect my self-centeredness in college and a a single woman living in London had something to do with my lact of personal involvement. 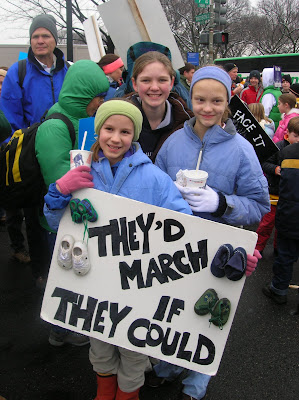 My pro-life activism resumed when I was pregnant with my first child in 1993. I prayed in front of abortion mills with a local pro-life group, and attended pro-life holy hours at my parish. I trained as a Birthright crisis pregnancy counselor, but didn't do any counseling at that time. When I moved to a more active parish, and joined the pro-life group I was pregnant with my second child in 1997, and participated in all the group's fundraising, prayer, educational and protest activities, including the March for Life. I took training as a crisis pregnancy counselor at Life Center, and frequently visited, bringing donations of baby items, and needy pregnant mothers. I was a phone counselor in Spanish for Life Center, and attended their fundraisers. I coordinated with counselors and helped a young woman in our parish chose life for her baby, who later wrote a note to the newsletter thanking me when the little girl was a toddler.
Soon after this, I began writing letters to the editor regarding life issues, contacting pro-life Congressman Mike Forbes, and twice working to get him re-elected. I worked for the election and re-election of President Bush. After moving to my current parish, where the pastor has prohibited a pro-life group, I have attended many educational seminars and protested at abortion mills, attended Holy Hours for life, collected baby items, and now that I have a special needs child, my letters to the editor, pro-life magazine articles, and blog are my major pro-life efforts. Blogs are powerful way to do an end-run around a sometimes stagnant Catholic establishment when it comes to activism.
Last March for Life, I brought my children before the March to the Blogs for Life conference, where I met Senator Sam Brownback, and volunteered to help his campaign. I have become active promoting a pro-life movie which is scheduled for release this fall, by hosting a screening in my area.
The second question is how do I think pro-life activists are perceived by the public? I think the media has done a good job using the few crazies out there who bomb clinics to paint pro-lifers with a broad brush and label us a busy-body, self-righteous old ladies who are ignorant, judgemental and angry, caring only for babies, and not for the mothers.
I remember a snide 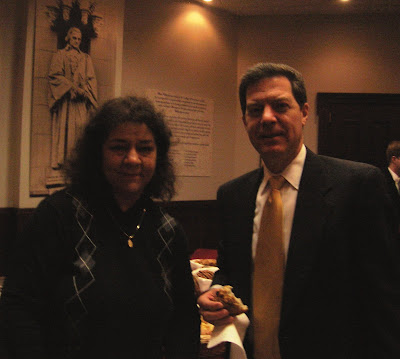 comment about the March for Life in Newsday, calling the marchers, "middle-aged women from Long Island, eating meatloaf sandwiches on the bus". The truth is, over 50% of the 100, 000 plus marchers every year are under 30 years old. The movement is full of enthusiastic, well educated youth, and is increasingly effective in recent years, as the Partial Birth Abortion Supreme Court victory attests. That was the result of years of political activism, since that ban was vetoes twice by Clinton in the nineties.
Since the media is over 90% liberal and has a well-known bias, pro-lifers are routinely vilified and mocked. The internet has helped to counteract this somewhat, as have several talk radio hosts such as Laura Ingraham, who are young, hip and pro-life.
Posted by Leticia at 6/30/2007

Wow, how inspiring. Thanks for sharing.

Also, it's interesting to me that you never wavered from your pro-life beliefs. I'm always surprised at how often I see young people who were raised in pro-life, Catholic homes fall under the influence of the pro-abortion mentality once they hit college. Any tips for keeping your kids pro-life?

This is a great story.

We grew up not far from you (my wife is from Queens Village and I am from Ozone Park.) We have made a number of Marches for Life. You can find some more pictures of this year's March on my blog.

We are now lucky to be represented by Senator Brownback since we live in Wichita, Kansas. Is a very recent convert to Catholicism, a choice that was a political liability.