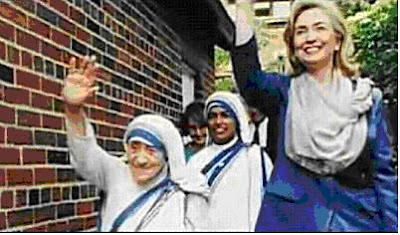 Thanks to the swift action of Joseph Cella of Fidelis who spotted a photo of Mother Teresa on a Hillary campaign video and alerted Sr. Nirmala, the superior of the Missionaries of Charity, the photo has been removed. Hillary was described in the video by husband Bill as a promoter of human rights. and this photo's inclusion was no accident.
Joseph Cella stated, “In our letter, we pointed out that the use of Blessed Teresa’s image was particularly inappropriate and disturbing given Senator Clinton’s staunch support of abortion both here in the United States and abroad. Mother Teresa tirelessly fought to protect unborn children, while Hillary Clinton staunchly supports abortion on demand in all nine months of pregnancy, including partial birth abortion and taxpayer funding of abortion.” “Blessed Mother Teresa is revered in America and across the globe as one of the greatest champions of the dignity of the human person. It is wholly inappropriate, disrespectful and disturbing that Hillary Clinton shamelessly exploited Mother’s image as a political tool,” Cella added
Politico's article on the controversy.
Posted by Leticia at 6/15/2007