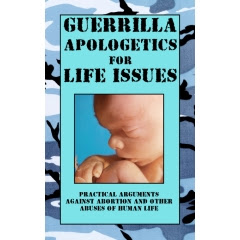 I must admit, the title Guerrilla Apologetics for Life Issues, along with the camouflage motif on the cover conjured up some startling images, for me for whom discussions on life issues have sometimes gotten, well, heated. Which sometimes makes me reluctant to enter into discussions, missing what may be unrepeatable opportunities to change hearts for life. Involved in pro-life activism since the seventies, I thought to myself, "more questions and answers, could there possibly be some I haven't read"?

This book, however, as the title suggests, comes at you from a new angle. An accomplished cartoonist for CNSnews.com, (many of his cartoons are included in the book) Paul E. Nowak knows economy of words, and trains the pro-lifer how to maximize impact with fewer all-night discussions, and blow-ups. Less collateral damage on the battlefield of ideas.
The first section deals with tactics. For example, do NOT try to get the other person to change their ideas on the spot, to 'win' the argument. You are reminded throughout the book that you are to keep the conversation going, where both parties ask questions, and no one is backed into a corner, where emotion replaces logic. What matters is friendship, so that, communication is maintained, and the other person is given the space they need to see, often privately, the fallacies in their position. Mr. Nowak says, "The manner in which you conduct yourself and treat others is far more powerful than any argument, however witty and true it is".
Mr. Nowak then gives some basic instruction on logical fallacies, which of course, the pro-choice side uses to defend the indefensible. Their arguments are based on oft-repeated slogans and deliberate misinformation, which after reading this section, you can detect and disarm, while maintaining a calm discussion.
Then, of course, there are the frequently asked questions section. But this book is only 74 pages long, how could it cover the complex life issues? Precisely because, if these questions are asked by the pro-lifer, who knows the answer, they eliminate the need for him to have extensive knowledge of complex issues such as fetal development. All he has to do is ask, "when do YOU think life begins?" and the pro-choicer will have to re-examine his beliefs, which cannot possibly withstand the light of such targeted questions. This is the guerrilla in Guerrilla Apologetics for Life Issues. To be on the attack, but from angles which aren't anticipated, and with disarming chattiness, not to wear you opponent down, answering endless objections. To calmly, respectfully listen to your opponent's questions, and then counter with one of these little zingers which he most likely had never considered, and will keep him thinking long after your encounter. That's when the change of heart will occur, giving you plenty of time to pray for him, as he discovers his inner pro-lifer. Most people are pro-life they just have to have it revealed to them. Mr. Nowak concludes,
"I have met several people who initially tell me they are "pro-choice, " but, as we discuss the issue further, their beliefs turn out to be more in line with the pro-life position than that of Planned Parenthood and other pro-abortion groups".

Get this handy little weapon into your pro-life arsenal, and fire when ready!
Posted by Leticia at 6/29/2007