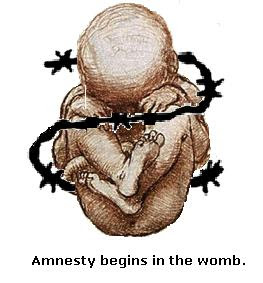 Cardinal Martino, head of the Pontifical Council for Justice and Peace, in an interview in the National Catholic Register, announced that the Catholic Church will be boycotting Amnesty International because of it's recent change in position. Amnesty International is now going to help the poor throughout the world kill their children. These are the same people who made a name for themselves opposing unfair incarceration, torture, and the death penalty.
Cardinal Martino issued the following statement,
“I believe that, if in fact Amnesty International persists in this course of action, individuals and Catholic organizations must withdraw their support, because, in deciding to promote abortion rights, AI has betrayed its mission,” Cardinal Martino said.
Martino said the Catholic Church says it is suspending any financial support or donations to the human rights group.
“No more Catholic financing of Amnesty International after the organization’s pro-abortion about-turn,” he said. He called the decision an “inevitable consequence.”
Here's where you can register your complaint, by emailing Amnesty International.
HT Cum Grano Salis
Posted by Leticia at 6/27/2007

Amnesty International has never received financial aid from the Catholic church as AI's policy is to never accept funding from any states or governments in order to remain impartial in the promotion of human rights. The Catholic Church is considered a state.