Hispanics and the Future of the Catholic Church 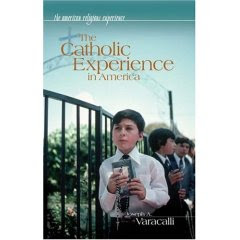 Lucky me, I have Nassau Community College an hour away with a department entitled, "The Center for Catholic Studies" run by Dr. Joseph Varacalli, author of The Catholic Experience in America. I was unfortunately out of town when George Weigel spoke, but I'm going on Monday the 25th to hear Oswald Sobrino, the author of Catholic Analysis speak on Hispanics and the Future of the Catholic Church. With a Latino luncheon beforehand.
I'll be posting on this.
Here is a sample of how Mr. Sobrino expresses himself. When postulating on the release date of the Motu Proprio, a reader challenges his use of the term John Paul the Great to describe our late Holy Father. He responds:
" what leads me personally to refer to him as "the Great"? When you read his biography (the one by George Weigel is considered the best), you see that he was a "Renaissance Man" of the Church who reformed and renewed everywhere:
-the revision of the Code of Canon Law in 1983,
-the first official Catechism in 400 years,
-the first step in allowing reintroduction of the Tridentine Mass as an option for some Catholics attached to that rite,
-the Theology of the Body as a powerful counteroffensive against the pagan "sexual revolution" that has caused so much harm to so many,
-the explicit encouragement given to the Catholic Charismatic Renewal as a renewal for the whole Church,
-the erection of Opus Dei as a personal prelature,
-the encouragment of ecclesial movements that are still rejuvenating the Church,
-the renewal of devotion to saints and of the custom of pilgrimage through his record number of canonizations and widespread visits to religious shrines,
-the renewal of moral theology by asserting the traditional moral teachings of the Church,
-the defense and celebration of philosophy as the search for truth and wisdom that works along with faith to show man how to live,
-the elevation of the office of pope as a spokesman for all Christians by defending orthodox Christian teachings,
-the repairing of strained relations with our Jewish brothers, including the establishment of diplomatic relations with Israel,
-the definitive teaching that the Church lacks the power to ordain women to the ministerial priesthood,
- the appointment of Joseph Cardinal Ratzinger (now, of course, Pope himself) as prefect of the Congregation for the Doctrine of the Faith,
-and the initiation of World Youth Day,
along with the inspiration of so many new priestly and other vocations. I am sure I have missed many other things.
You might want to take a look at the Wikipedia article on JPG at this link for matters I have missed. "
Now you know why I have been looking forward to his talk!
Posted by Leticia at 6/19/2007