If the fetus could legally be described as a "person", then, state and local laws protecting any individual life would be applied to the unborn. It targets a loophole U.S. Supreme Court Justice Harry Blackmun created when he wrote the original abortion opinion.
He concluded: "(If the) suggestion of personhood [of the preborn] is established, the [abortion rights] case, of course, collapses, for the fetus' right to life is then guaranteed specifically by the [14th] Amendment."
Several states, Colorado and Georgia among them have taken the direct approach to ending abortion, frustrated with fighting for smaller victories, like parental consent. Once the personhood of the unborn baby is legal, a direct challenge to Roe v Wade may be made, and the fight is over. Not to say this will be easy, considering the money behind the abortion industry, but it may be a better use of our time and effort. Abortion was legalized by judicial fiat, and may be stopped the same manner.

This position has been held for years by activists, and I believe, emboldened by the strides made in 40 Days for Life, 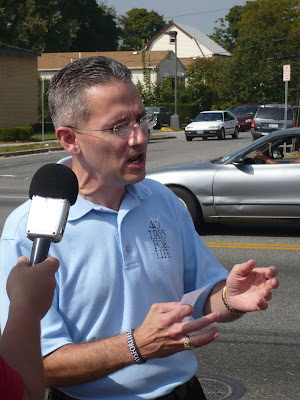 they are pushing forward to "the beginning of the end of abortion". David Bereit said to my daughters as we stood outside Planned Parenthood, "you are rebels, rejecting the culture of death, you will tell your grandchildren about this day, when you stood here with your mother and began the movement which brought about the end to abortion". It sent chills down my spine. So does this movement to define personhood. It's just bold enough to work. We have to stop apologizing for our position in favor of the helpless. We didn't apologize to Hitler when we rescued the prisoners in Auschwitz. The abolitionists didn't apologize to slave owners, when they helped their slaves to freedom, and the civil rights marchers didn't feel badly about hurting the business of segregated lunch counters at Woolworth's.
Make the pro-abortion side explain how an unborn baby isn't a person. What kind of convoluted reasoning must they invent to defend that irrational position?

Read the entire article in World Net Daily Get jazzed, everyone, the other side is starting to panic.
Posted by Leticia at 11/15/2007