Bye bye, "Blowing in the Wind" 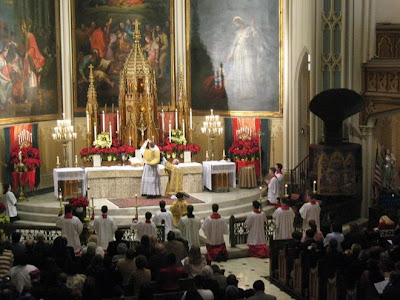 Did I ever tell you how to drive me absolutely over the edge? Sing "Blowing in the Wind" especially with Bob Dylan's nasal whine. It's not because I hate folk music. I love it, even the sixties stuff. I even attended a Peter, Paul and Mary concert.
But I can't extend this preference to "Blowing in the Wind" and I'll explain why it pushes my buttons.
I was born during Vatican II, into a gorgeous traditional church, dark and mysterious with inspiring images of St. Joseph teaching carpentry to the boy Jesus. My childhood memories of Mass are of stirring organ chords which shook the floor of the church and the scent of incense wafting through the air. I didn't see much other that the backs of the adults, and glimpses of that mural of St. Joseph, but I'll tell you that the unspoken message received by me as a preschooler was: you are on holy ground, the Lord Almighty is here, and you are looking into heaven. I loved it, and would often visit this beautiful church during the week with my mother to light a candle and visit Our Lord. We always brought our veils, or if, we forgot, a hanky would do, because no woman entered the church without a head covering.
This sense of other worldliness and mystery was promptly shattered, when at age 5, we moved to another parish, whose church was under construction and had Mass in a bland auditorium. A folk singer sang pop hits from the sixties, and Vietnam War protests took place during Mass. Our folk singers' favorite song was, you guessed it, "Blowing in the Wind".
I mourned the loss of the beauty of the Old Mass, the gorgeous music, and the sense of mystery it brought. I have been trying to replace it ever since. That's why I anxiously awaited Summorum Pontificum, and am involved in bringing back Gregorian Chant to the Traditional Latin Masses springing up on Long Island. I pray that we can get together some decent scholi (?) for the Holy Father's masses in New York.


Now, here's an encouraging article in the UK's Daily Telegraph to remind me that I have an important Ally in restoring ethereal music to the sacred liturgy.Damian Thompson, editor-in-chief of the Catholic Herald writes:
We are moving into an era of liturgical revolution. Benedict detests the feeble "folk Masses" that have remained the staple fare of Catholic worship long after they went out of musical fashion.
He wants the Church to rediscover the treasure of its heritage - and that includes Gregorian chant as well as the pre-1970 Latin Mass that can now be celebrated without the permission of bishops.
Posted by Leticia at 11/20/2007

I guess we are about the same age. Your post captures my feelings pretty well too. Except I also have this lingering negative sense of betrayal that I am trying hard to shake. I can't fathom why this was ripped out of our lives. My father sorrowed over the change in the liturgy for years.

The press usually sums up the difference as "Mass-in-the-vernacular-with-priest-facing-the-people" and no one is speaking to the significant differences in the prayers in certain parts of the Mass. The net effect of the ORdinary Form has been to shift perception away from the Holy Sacrifice and toward a celebratory Communion meal, and I don't think we have been well-served by a reduced sense of sin, and the reduced awareness of the enormous sacrifice of the Cross.

I certainly prefer the language, the music, the vestments and the general deportment of the people at the EF Mass, but in a few short weeks, the way it's shifted my attention in my relationship with God toward a truer awareness of His and my place in the grand scheme of things has been profound.

I wish there were some sort of Extraordinary Form study group or something where people could discuss this (other than on the blogs, of course)