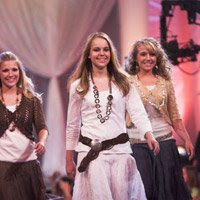 I have posted on the trend in modest fashion shows, but this is the first ever conference on modesty at a Washington DC think tank; the Ethics and Public Policy Center is hosting, among others, Dawn Eden to discuss a return to modesty on college campuses. The only time I have seen this subject broached on college campuses themselves, is when I was a freshman at St. Anselm, and the counseling center had a discussion on "losing your reputation". I had spent the entire first month of college fending off suggestive remarks from seniors who apparently saw me as, 'fresh meat'. I accepted a date with a the gorgeous captain of the baseball team, Dave, only to discover that I was to have been part of a competition to score as many Freshman as possible. He struck out with me, folks!
I did have my revenge, however, for his repeating some things I had told him during our chaste date to fellow frat guys. I collected a number of the girls he left behind in the lounge of my all-girl's dormitory, and as Dave came for the next conquest and waited while she was paged (we asked her to take her time) he had to face all the girls he had lied to. It was priceless!
Posted by Leticia at 11/09/2007