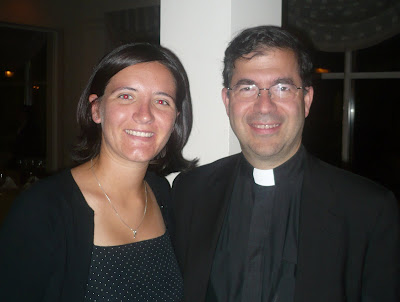 The annual Life Center Dinner Dance was held on Thursday, October 11, when hundreds of supporters gathered at the Woodbury Country Club, despite road closings, flooding and a reported tornado. Sprits were high as the crowd anticipated the arrival of keynote speaker, Fr. Frank Pavone. Deacon Frank Gariboldi, husband of Lorraine Gariboldi, the Director, kept the crowd informed of Fr. Franks’ slow progress through the snarled traffic around New York City. The trip from the airport took five hours.
In her talk, Lorraine share recently on a trip to Washington, DC, the Federal Government singled out Life Center among dozens of participants in a focus group for their outstanding work, and asked them to apply for more grants to promote chastity education on Long Island. Life Center has already received a $3 million grant to give abstinence education in school districts. They have been invited into 7 districts where their influence has given hope to thousands of Long Island teenagers. Life Center has just purchased an RV which will be equipped with a sonogram machine to travel to all the abortion clinics on Long Island, offering women a look at their unborn children. More that 88% of women who see their unborn child in a sonogram, change their decision to end their child’s life. 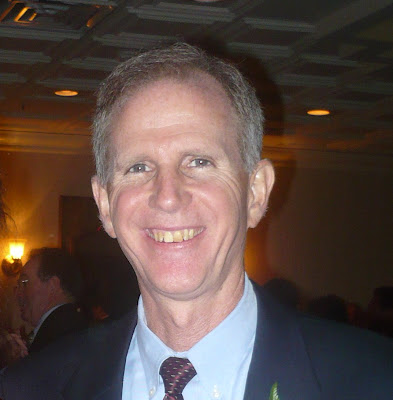 Life Center volunteer, Dr. Robert Scanlon, an obstetrician from Huntington, sees five women a week from the Life Center, all of whom decide to keep their babies. His gentle manner and prayers to the Holy Spirit for inspiration are the secrets of his success in saving lives. He shared about a time in his life when he doubted his faith, while on a trip to St. Peter’s Basilica in Rome. “I stood where St. Peter gave up his life for the faith, and then the guide showed us the tomb of another pope, who lived two weeks, and was killed, the next who lived three months. . .and I said to myself, ‘these men died so that the faith would come to me, and I’m doubting it?” Dr. Scanlon in addition to the women he sees from Life Center spends two weeks in Nigeria delivering the babies of poor women who have little access to medical care. His dedication to the sanctity of human life is a testament to his vibrant faith.
The crowd was thrilled when Fr Pavone arrived late, but undimmed in his enthusiasm. This is a man who has faced the media and the pro-choice movement without flinching, so he was not inclined to let a mere tornado dissuade him from speaking on behalf of Life Center. Fr Frank Pavone founded Priests for Life in 1993 with the permission of Cardinal John O’Connor, and after some time in Staten Island, Priests for Life has founded a new order of priests based out of Amarillo, Texas.
“I don’t know if you will believe this, but I average four states a week and I can tell you from what I see that the days of legal abortion are numbered”. He assured us, “One day, we will attend banquets like this one to celebrate this victory”. Why does Fr. Frank have this assurance? He continued, “What we in the pro-life movement are about is; solidarity with women who have been wounded by abortion, and their voices are being heard through such campaigns as ‘Silent No More’. There is nothing the pro-choice movement can do about this; they were the ones who told us to listen to women, and they can’t take it back now that more and more of them are saying that they regret their abortions. They try to counter us by having women say they don’t regret their abortions, but they can’t say that this abortion is a positive thing. We know the pain of women who have had abortions from running the nation’s biggest post-abortion ministry, ‘Rachel’s Vineyard’. Can the other side have a counter rally of women who say, ‘I regret my child’? No way!”
On pro-abortion politicians, Fr. Frank was clear,” Imagine if a candidate were to say, ‘I don’t believe in terrorism, but I don’t want to interfere with your right to support it.’ Would you ask him what his tax policy was? NO! You would consider him unfit for public office! It’s the same with pro-abortion politicians, if you believe that some members of our society are to be killed, you are not fit to hold public office.”
Fr. Pavone said that many of the Dinner attendees were veterans of the Civil Rights Movement. He continued, “One March for Life, I was walking with Dr. Alveda King, niece of Dr. Martin Luther King, and co-director of the “Silent No More” awareness campaign, and asked her whether this movement was a continuation of the Civil Rights movement. She answered, ‘This IS the Civil Rights Movement, and my uncle believed in equality for all men and opposed all violence’.”

Many take the youthfulness of the March for Life participants (half of whom are under 30) as a sign of hope for the pro-life movement. Fr. Pavone does as well, and understands that their motivation for becoming involved in the pro-life movement is different than their parents’. Fr. Pavone said, “Anyone who is under 35 has to think, “It could have been me” who was aborted. USA Today had an article on ‘Survivors Syndrome’ where the Iraq War veterans come home feeling guilty about their buddies who were killed over there, wondering whether they could have done more to save them. It’s the same thing for youth, they realize they could have been aborted, and it will take a long time to understand the ramifications of their suffering. Their motivation is another fact that can’t be counteracted by pro-aborts”.
Fr Pavone closed his stirring speech saying, “We know we come from the victory of Christ on the cross, so even though the abortion industry makes a half a billion dollars a year and spends millions in public relations efforts to support abortion, but in the end, as GK Chesterton once said, ‘truth, pressed to the earth will rise again’”.
Posted by Leticia at 11/13/2007