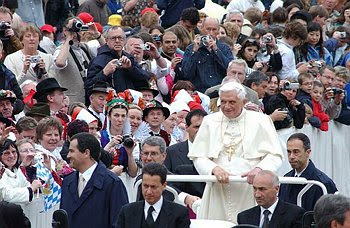 by RACHEL ZOLL, AP
Pope Benedict XVI will make his first visit to the United States as pontiff next year, and plans to visit the White House, ground zero and speak at the United Nations, Archbishop Pietro Sambi told the U.S. Conference of Catholic Bishops Monday.Benedict will travel to Washington and New York from April 15-20, speak at the United Nations on April 18 and visit ground zero on the final day of his trip.
The pope will visit the site of the Sept. 11 terrorist attacks in New York to show "solidarity with those who have died, with their families and with all those who wish an end of violence and in the search of peace," said Sambi, the Vatican's ambassador to the U.S.
The visit will take place on the third anniversary of Benedict's election to succeed Pope John Paul II, who died in April 2005.
An official welcome reception for Benedict will be held at the White House on April 16, Sambi said. The pontiff will celebrate two public Masses, first at the new Nationals Park in Washington on April 17, and again at Yankee Stadium on April 20.
He will also hold meetings with priests, Catholic university presidents, diocesan educators and young people."The pope will not travel much, but he will address himself to the people of the United States and the whole Catholic Church," Sambi said.
I understand that the Holy Father will be celebrating his birthday at the White House, with a President who respects the papacy enough to have visited his predecessor twice during his lifetime. President Bush even asked Pope John Paul II for his advice on embryonic stem cells, and while he should have followed it more closely, I'm certain the Holy Father's opinion made a difference in the President's decision to only allow federal funding on existing embryonic cell lines. This position has earned him the scorn of both Republicans and Democrats.
I'm so thrilled Pope Benedict is coming to New York! I hope they listen to him at the UN; our influence there is a hard-wo 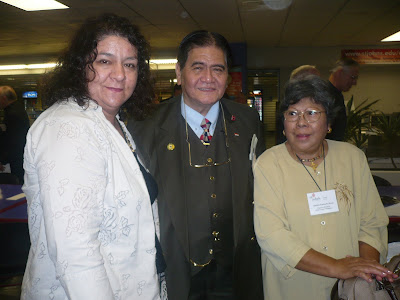 n outpost in hostile territory.
At the SCSS Conference, I was able to personally thank Susan Yoshihara and Austin Ruse for their stellar work at the Catholic organization at the UN, C-FAM. I was also privileged to meet Antonia Emma R. Roxas, accompanied by Jose David Lapuz in this photo. Jose is the only representative from the Philippines at UNESCO. To have such stellar Catholic intellectuals in place in the UN, and to hear that the General Assembly will be addressed by Pope Benedict, is a hopeful sign. Now we need to pray that the American public, particularly Catholics, are open to hear the message he comes to speak to us.
I only have one question: who's going to meet me at Yankee Stadium?
Posted by Leticia at 11/15/2007

Monica, you and your family are more than welcome at my home anytime!