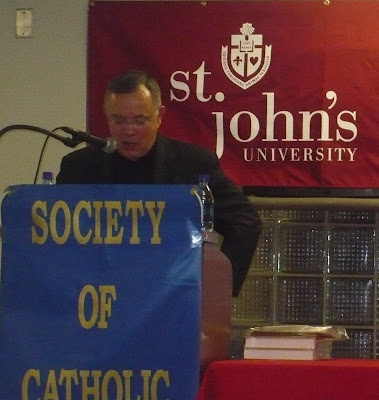 The title of his address, "The Church and the State Today; Giving to Cesar what is Cesar's", made one expect a typical discussion of politicians who should be adhering to Church doctrine by their votes, allowing the faithful Catholics in the room a measure of complacency, but the soft-spoken bishop had no such plans.

Rather, he described a culture, advanced in technology, with diversity of religious belief which were largely practiced in private, and a widespread infertility problem, fueled by rampant homosexuality, abortion, promiscuity, and contraception. Lawmakers try to help save families, but their efforts get nowhere, till the entire society sinks into oblivion. This nation, though it sounds eerily familiar to us, was Ancient Rome in it's decline, at the time Christ lived on earth.

Agnostic Rodney Stark in his book, "The Rise of Christianity" studied the causes of Christianity's successful takeover of the greatest empire of the Ancient World, in a matter of 400 years. Here, says Stark, were the strengths of the Christians' approach:
1. Doctrine; the Gospel of Jesus
2. Strong Adherence to that doctrine, those who believed in Jesus rejected the immorality of the surrounding culture, and lived pure lives, in contrast to the debauchery around them. Athenogoras said, "we regard that the fetus as a created being and object of God's care", clearly rejecting abortion. The Early Christians recognized the Culture of Death that was the Roman Empire. Venutus Felix said that birth control was an abortifacient,which "stills the beginnings of the person to be".

It was the courage of the first Christians to challenge the culture, trusting in God first, obeying and loving the Church as their Mother that helped to bring about a conversion of an entire society. They recognized that they were citizens first of Heaven, and were willing to stake their lives on that conviction.

Archbishop Chaput enjoined the 400 prominent Social Scientists at the Conference to first live their Catholic faith fervently, or they would have nothing worthwhile to bring to the debate. They should trust in the Lord's promise that, "the Truth will set us free", and remember if powerful Pagan Rome could be won for Jesus, so can this neo-pagan culture, we simply need to live our faith!
Posted by Leticia at 11/12/2007