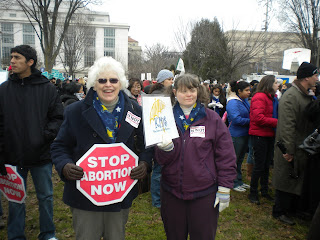 from Marjorie Dannelfeser;
Tomorrow afternoon, I am meeting with Rep. Bart Stupak—the pro-life Democrat from Michigan who has taken the lead on Capitol Hill in the fight against abortion funding. I know Congressman Stupak is doing all he can to ensure that this Senate health care bill does not lead to hundreds of thousands of taxpayer-funded abortions across the nation. But he cannot do it alone.

Time is so short. Speaker Pelosi is dead set on forcing a vote to pass the Senate health care bill by March 18th, opening the floodgates for abortion on-demand, at the expense of you and me. But, she doesn’t have the votes yet.

You MUST call your Representative right now to tell them you do not want this pro-abortion health care bill.

Earlier this week, Nancy Pelosi told the LA Times, "I think we can get there, but I'm going to need help from any place I can get it." Everything is resting on the House members, who desperately need to hear from their constituents right now. The more pro-life pressure we can generate in the next 2 weeks, the better. We’ve got to flood these representatives’ offices with pro-life phone calls.

I know I have asked a lot from you this week, but please immediately TELEPHONE the Washington, D.C. office of your Representative. I promise, it is so easy, just click here to get your representative’s phone number and helpful talking points.

You and I both know that we cannot just sit back as the largest expansion of government-backed abortion on-demand since 1973 comes to pass. The lives of hundreds of thousands of unborn babies are at risk. You must make your voice heard in Washington today.

The polling we released last week shows just how much impact the constituents have on their Member of Congress. At least 3 of every 5 people surveyed across eight districts agreed, “Abortion and abortion funding have no place in health care reform.” Also, the majority of Americans in the districts polled are less likely to reelect their Representative if they vote for pro-abortion health care reform.


I can’t wait to share these poll results with Rep. Stupak tomorrow. He needs all the backup we can give him, so please call your Representative right now. Be sure to let me know how it goes so I can tell Rep. Stupak how many people have called their Representatives.

I called Congressman Joe Courtney's office and was given the line by the female staffer who answered the phone  that the Hyde Amendment would prevent  federal funds for abortion, I called it a 'bait and switch tactic' where Planned Parenthood puts the federal funds in one pocket and pulls out more abortion funding from the other.S he tried to cite Nancy Pelosi, and I asked her to cite someone reliable, like Rep Chris Smith. who called this legislation "the greatest expansion of abortion since Roe v Wade" or Bart Stupak who won't vote for it because of abortion funding.I told her I saw the SEIU lobbyists bragging that their time had come as they walked the halls of Congress after the election. I know that Obama and Courtney are beholden to NARAL, PP and the pro-abortion unions for their elections, and that they will be benefiting mightily from this health care plan with my tax dollars!
I reminded the staffer that I have travelled both to Courtney's Town Hall Meetings, and to DC three times this year to oppose abortion funding in the health care plan. I informed her that I am a blogger for David Horowitz's Newsreal and Catholic Vote.
The female staffer tried to tell me what a noble organization Planned Parenthood is, and I educated her about the eugenics of Margaret Sanger. and asked her if she knew the stats of abortion in the black community, and told her to look up photos of Sanger with Nazis and KKK members. She wanted to reduce the poverty rolls by eliminating the children of the poor,and PP still does that by abortion. She tried to tell me PP does many good things for women, and I asked her if she knew of the Hartford case where a minor girl who was kidnapped and molested was given an abortion legally thanks to laws preventing parental notification, and was returned to her rapist's custody instead of saved.
. I told her I wouldn't be associatee with any group which is racist and exploits women, like PP. I reminded her if Courtney voted in favor of this bill, that I would continue to work for his opponent, Matt Daly, a pro-life candidate for the Second District in CT. At that point, she took my address, and I felt like I was making an impact. I reminded her to check her facts about wonderful Planned Parenthood, told her I am not a Republican,. but  a pro-lifer and no one can buy my vote. I hope she will do the same. We parted amicably, and I am praying for her.
Once while talking with the female staffer of a pro-abortion Congressman I asked her if she suspecte the pro-abortion people were after money, and reminded her that no one pays pro-lifers. She was taken aback by this and I think may have had a change of heart. That's why I told the Courtney staffer the same thing, I do this for love of these women, not for money. I rarely get paid from anywhere I write, and if I do, I spend the money on gas to get to my next protest or conference.
The need is more urgent than ever to save this nation from the encroaching Culture of Death.
Have you called your congressman today?

Keep speaking out. Have you watched the documentary about abortion and Black Genocide called: Maafa21 ? You should get this film-http://www.maafa21.com