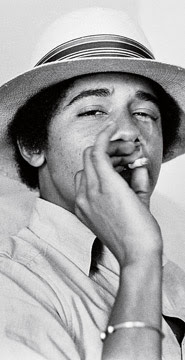 This photo of Obama taken during his Freshman Year in College was hidden during the election. While there are few of us who haven't done something foolish or immoral during those years, most of us have the humility to avoid being cast in an almost divine light, in the view of our past failings. God might have forgiven us, but the press won't. Unless you are the Chosen One.
Smoking was one of the few vices which President Clinton did not participate, so while in office, he made smoking a mortal sin. Although I am thrilled that am no longer a victim of second hand smoke in public places, it has gone too far. Smoking is preached against in every health class while life-threatening sexual exploits are encouraged.
Films which depict people smoking are censored, which is hypocritical since they can be breaking all of the Ten Commandments in broad daylight but they must NOT be seen smoking. Now Obama gets away with even that.
This is what happens when you write your own moral code, ignoring the millenia of Judeo-Christian morality.
HT Times Online.
Posted by Leticia at 12/19/2008

This post is ridiculous. it's been widely known since at least Obama's 2004 Senate campaign that he smokes and has tried to cut back or quit. His smoking was mentioned in the statement on his health from his doctor, Michelle Obama's mentioned it, and Obama himself recently said that he regrets having smoked a few times during the long campaign season. There was also a series of news stories about whether he would smoke inside the White House. He said he wouldn't. There's also a far more recent photo (i. e. taken around 2006) of Obama smoking which I've seen several times in the last few years.

By the way, Laura Bush has also been known to smoke. John Boehner (House Minority Leader) is a well known smoker (and a pro-life Catholic.) As far as I know Boehner has made no comments about his desire to quit, etc.

I know you don't like Obama, but can't you come up with something better?

A picture is worth 1,000 words. I said that this photo was held back, AND Obama's medical records. Besides, the liberals want dangerous sexual promiscuity to be accepted, and drug use, so THEY used smoking as the ONLY sin (besides intolerance).
Conservatives know that homosexual relations, and illegal drugs are FAR more dangerous than nicotine. Since we haven't been part of this hypocrisy, that cigarettes are SO BAD, we needn't be held up to scrutiny if Laura Bush smokes. SINCE Obama wanted to be seen as the pure savior of the free world, he needed to keep this image from the public. Unlike President Bush's DUI arrest, there was no October surprise with this photo.
Whose side is the media on?

You should do some research before you post such nonsense. I read the article that accompanied these pictures... clearly you did not. It wasn't liberal-biased Time Magazine who waited until after the election to release the photos, but the photographer herself (who is now a psychologist):

"For a while, Jack put the negatives in a safety-deposit box, so that they could not be used until after the election, when there would be no chance they could be used for a political purpose."

Biased journalism? Those who live in glass houses...