Our Lady of Breezy Point speaks 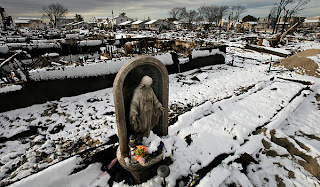 One of the first photographers on the scene, Frank Franklin II of The Associated Press, reached the corner of Oceanside and Gotham at 6 a.m. on Oct. 30.
Winding through the fields of blackened debris, he found himself transfixed by the statue of the Virgin Mary. Though raised by Protestant parents, Mr. Franklin attended a Catholic high school and he immediately perceived a deeper meaning.
“It’s weird how I was drawn to it,” Mr. Franklin, 40, recalled. “I’m not the most religious person in the world, but I know what those images are. When I made that frame, I knew it would resonate with people. What I couldn’t imagine was how much.”

I see it as a sign that Our Lady is praying for us. That, even this devastation can be a means of grace in our lives,and can initiate a rebirth of faith in our hearts if we heed the call to come home to the practice of our faith. It is no accident this sign came just as Catholics were facing a major election AND beginning the Year of Faith. Even a Protestant who is distant from his faith can feel it. Even the New York Times writer Samuel Freedman ( sounds like a good Jewish name) can feel it. Read the entire New York Times article here.
Why are we not reading the signs of the times?
I am as guilty as anyone. I should know better.
When I was praying before Jesus in the Blessed Sacrament, He spoke to me, but I refused to listen until the devastating election results came in. I am no saint, but I do consider myself a practicing Catholic.

I hate to admit it, but I knew this, going into the election. I prayed before the Blessed Sacrament for an hour on election day, picturing voters touched by the grace of God which I was pleading for them, and voting pro-life. But I left thinking, "we are not ready for a revival of moral behavior and faith in this nation. We will not vote for a pro-life candidate" (assuming there was one, I am still skeptical). We need to suffer more before we are going to change.

Matthew Warner at the National Catholic Register wrote a great article in the lesson we should draw from the election here.

If you're discouraged or think the world is upside down, I have something for you.
Whether marriage is redefined now or later, whether our religious freedom is trampled now or in 10 years, these are not at risk because politicians are getting bolder, they are at risk because our convictions are getting colder.


Guess what, regardless of who won the election, today we still have millions of babies being aborted every year. We still have 50% of marriages ending in divorce. We still have a supposedly Christian culture that has separated sex from marriage from procreation. We still have many Americans who are more likely to vote based upon peer pressure, or how nice somebody is, or their own self-interest, or by what the media told them, or by what's socially easy than they are to vote based on their own moral or religious convictions (or any economic sense). We still have lonely and suffering people in our communities who need to be loved.


Matthew is right. We Catholics have LOTS of work to do to undo the damage done by the sexual revolution. To build a Culture of Life and launch the New Springtime of Evangelization. And I am the only person who can begin this change. Waiting for politicians, priests, or even bishops to act first is a cop-out. Blaming secularists, pro-aborts, or Obama won't change anything.


I love this video because it features Pope John Paul and Lech Walesa who are not political leaders (Lech wasn't when he began Solidarity in a Gdansk shipyard) but they stepped out in faith, tiny Davids against the Goliath of Communism, and they suffered and fought till they won. We must follow their example for the Goliath of the Culture of Death is just as soul crushing as Communism or Hurricane Sandy was. If not more.

So must we suffer, pray, fast, fight until marriages last and babies are allowed to live. Till we have to build more churches to hold all those who want to attend daily Mass.
It will come, but Our Lord is looking at me to begin to change to set off a change reaction. What am I waiting for?