Yesterday, I was devastated to learn that my mentor and friend, Barbara Curtis has gone home to her Father's House. She left us suddenly, suffering a massive stroke.
Barb and I met at  American Life League's  pro-life blog award ceremony in 2009, I was honored as a newcomer to writing, to be seen as a pro-life blogger honoree with Barb, who has written 700 articles, and a dozen books. She, however, was as excited as I was about our awards, she squeezed my hand and said, "look, those are the trophies on the table!" Barb may have been more accomplished than I but we found ourselves bonded when she returned to the Catholic Church and began corresponding. We shared writing, our Catholic faith, and special motherhood. I looked up to her as a role model of a woman who balances writing and family life. I was inspired by her unforgettable conversion story. Her large family of 12 with four sons with Down syndrome was a role model to many and was highlighted in the Washington Post . Barb was an ardent pro-lifer and compiled a photo album from each year's March for Life to make up for the lack of media coverage. She was busy but humble and never failed to answer my emails. Although we only met once in person, I consider her a friend.
My girls and I watched with tears and cheers the video of her lovely daughter Maddie's audition for American Idol which featured a moving story about the Curtis family at home and her brothers' enthusiasm at her success. Barb was trying to raise funds for Maddie's studies at Catholic University, and I know we will be taking a collection for her soon. I will post the address where donations may be sent. 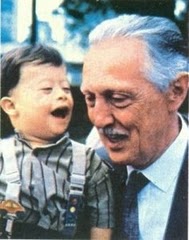 Barb was kind enough to allow me to use "A Little Extra" her story about Jonny, her oldest son with Down syndrome for my book A Special Mother is Born. We were collecting notes about people who were asking for the intercession of Servant of God Dr Jerome Lejeune for their healing. Here is the beautiful tribute she wrote to Dr Lejeune last April in Celebrate Life Magazine.
Barbara did much good on earth and she will be sorely missed by we who were touched by her amazing career, but most of all by the family she created in love with her husband Tripp, however, I like to imagine Barb, on this All Saint's Day, sharing a leisurely French meal (and a bottle of wine) with the good professor as they intercede for our special needs children here on earth.

UPDATE All Soul's Day. Here is a remarkable tribute from Barbara's husband Tripp which includes her funeral plans and an address to send contributions. It is a testament to their marriage and it proves that eloquence ran on both sides of the family.

What a beautiful tribute, Leticia! The last part made me cry. Some day I hope to be a beggar at that dinner table.