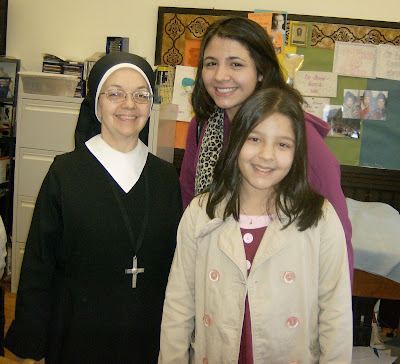 This is the legacy of the misinterpretation of Vatican II, the corruption of the Democratic party, and the greediness of teachers unions. School closings in New York.
I have worked in many poor school districts and they NEED solidly academic, orthodox Catholic schools. The public schools are infested with gangs, drugs and moral degenerates, yes, I'm talking about the teachers. Catholic schools should be a beacon of hope to the poor, and if the Democrats really cared about the poor in New York State, they'd allow the subsidy of these schools which make a difference in the lives of poor children. Instead they bow to the teacher's unions who are afraid of the least bit of competition.
There's even a tuition tax credit bill in New York State called the Educational Tax Incentive Act (S3627/A6432) which would funnel funds to both private AND public school when a family decides to enroll their child in private school. According to Rick Hinshaw the editor of the Long Island Catholic:
"The bill allows parents to deduct tuition at nonpublic schools from their state taxable income. Those with incomes too low to pay taxes and who qualify for the state earned income credit could receive a tax credit of as much as $500. That would result in a rebate being paid to them.The amount of the tax deduction will vary according to income level and will increase over the next four years. For example, a family who earns less than $115,000 a year would receive a $2,500 deduction for 2007, which would increase to $5,000 in 2008, $7,500 in 2009, and $10,000 in 2010.Those with higher incomes would receive smaller deductions. For 2010, those earning $115,000 to $120,000 would receive an $8,750 deduction. The deduction would continue to drop $1,250 for every additional $5,000 of income up to those earning between $145,000 and $150,000, who would receive a $1,250 deduction."
But the Democratic controlled State Assembly most likely won't allow the bill to see the light of day, it's so beholden to the AFT(American Federation of Teachers).
I have spoken to a politically active teacher in New York City Schools, he campaigned tirelessly against liberal Bella Abzug because she once failed to support a teachers' strike. NEVER cross the teacher's union here in NYS! That's why a blue state like New York had Republican Alfonse D'Amato as US Senator. Until he criticized Hillary, that is. . .
And as for the Catholic schools, well no school in this expensive area can run without the cost effectiveness of teaching sisters. And there are very few sisters left. They left the convents in droves after the reforms of Vatican II, and the few that remained want apartments and important jobs. They don't want to be humble teachers for the children of the poor, they want to be principals and school administrators. Those that remained in the schools here on Long Island are involved in Reiki, the enneagram and labyrinths, all linked to the occult. What ever happened to the rosary, Eucharistic devotion and the saints? What are Catholic parents to do in this state?
THAT is why my girls and I will be leaving Long Island for these wonderful Catholic schools in Connecticut(see photo). My husband will have to commute work both in CT and LI, to help us live there, but for the proper education of our girls, any sacrifice is worth it.
We are losing the children of the poor to the corruption of the streets. The sisters of the Catholic Church used to be their champions. What a shame!
HT Fox News
Posted by Leticia at 3/11/2008