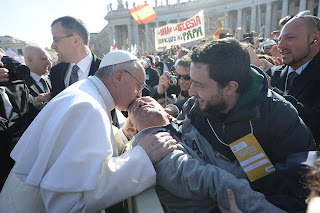 Pope Francis on the Church's "small-minded rules" and his outreach to gays:
“The church sometimes has locked itself up in small things, in small-minded rules. The most important thing is the first proclamation: Jesus Christ has saved you. And the ministers of the church must be ministers of mercy above all. The confessor, for example, is always in danger of being either too much of a rigorist or too lax. Neither is merciful, because neither of them really takes responsibility for the person. The rigorist washes his hands so that he leaves it to the commandment. The loose minister washes his hands by simply saying, ‘This is not a sin’ or something like that. In pastoral ministry we must accompany people, and we must heal their wounds...
"In Buenos Aires I used to receive letters from homosexual persons who are ‘socially wounded’ because they tell me that they feel like the church has always condemned them. But the church does not want to do this.During the return flight from Rio de Janeiro I said that if a homosexual person is of good will and is in search of God, I am no one to judge. By saying this, I said what the catechism says. Religion has the right to express its opinion in the service of the people, but God in creation has set us free: it is not possible to interfere spiritually in the life of a person.

A person once asked me, in a provocative manner, if I approved of homosexuality. I replied with another question: ‘Tell me: when God looks at a gay person, does he endorse the existence of this person with love, or reject and condemn this person?’ We must always consider the person."

Here is my take.
Too often the position of the Church, that homosexual actions is sinful, alienates the person struggling with same sex attraction, and he or she does not seek healing and confession, feeling rejected. What have we gained if he or she doesn't return to the Church? Is that what Christ died for, to alienate the sinner who then seeks refuge in his sin?

My friend, married for several years, the father of several children and an active member in lay ecclesial movements, experienced a severe crisis in his family, a double murder of those closest to him. His reaction was to return to the sin he thought he had overcome by himself; homosexual relations. Fr Harvey of Courage offered to personally counsel him and his wife. For some reason it didn't happen, and an opportunity to save a family was lost. This man was a leader in the Church, a great husband and father who carried a deep wound not one of us who cared for him knew about. Fr Harvey's offer to counsel him did not include, I am sure, finger wagging in his face, nor would it include justification of his sin, as I suspect some clergy had done for him. I feel that it would have led to healing and a repentant sinner who could witness to others.

But now Fr Harvey is with the Lord, the family lives in the same house, on different floors and is in constant acrimony. No one attends Mass anymore, and they seek consolation in the world. . I pray for them and ask Fr Harvey's intercession for healing.