Tales from the The Pro-life Table at the Fair

If you ever want some time to 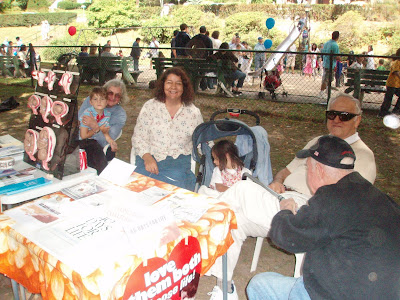 yourself, volunteer to man the pro-life table at your local street fair. You'll get lots of time alone, as most fairgoers give you a wide berth. This has happened to me many times before. But not this time.
I was late in registering the table for the 40 days for life in Northport's Cow Harbor Day Fair, so I was fortunate to score a table in the most crowded section of my hometown's lovely waterfront park. I set up the table between a science geek with a fascinating show of bubbles, and a shy lady selling jewelry. I had experience, however, that told me to use the secret weapon.

The secret weapon is a series of fetal models, in the womb, that are so lifelike that Christina kept taking the babies out to cuddle them. She's not the only one who wanted to cuddle them. Dozens of little children, pulled their often reluctant parents over to the display, to, "see the babies". This I had seen before. Many of the mothers used the teachable moment to tell the children, "that's how you looked in Mommy's tummy". What's the value in that? Someday, these innocent children will be in a health class where the teacher will lie and say that these are just "blobs of tissue". These youngsters will know better. They've seen the truth.

What did surprise me were the teenagers, who were just as attracted to the babies. Some were there to tell me what they learned in health class, like t 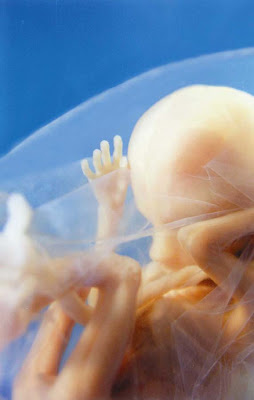 he boy who said, "this is what happens when you don't need protection". I reminded him that married couples see children as a great blessing, as his parents likely saw him. He seemed pleased that there was a more positive way of looking at babies, than something to be avoided at all costs.
Most touching was the petite young lady, with the beautiful hairstyle, and unusual tiny earring in her upper lip who quietly told her friends, "this won't be happening to me, because I'm abstinent".
I resisted the urge to hug her and embarrass her in front of her stunned companions. I merely asked, "why are you abstinent?", to which she replied proudly, "because it's the right thing to do". Her friends' mouths were still slack with amazement, so I jumped in, adding, "you're just like American Idol Jordin Sparks, who showed off her purity ring on 'Fox and Friends'". Her male friend had recovered enough to attempt a crude comment on chastity belts, and I cut in with, "did you ever hear the story about the young woman who wrote a letter to her future husband when she was 14? On her wedding night, ten years later, she gave it as a gift to her husband". That did it, my eyes filled with tears, as I added, "can you guys think of a better wedding gift to give your future spouse?" No more smart comments, just a new found respect for their attractive, chaste friend. She held her head a little higher, leaving the table, and I was so proud of her!

Of all the people who approached the table that afternoon, only three were negative. One woman in her fifties, holding her husband's hand, intoned the mantra, "if you take choice away from one woman, you take it away from all women". I tried to engage her in a discussion, but the mantra was repeated again and again, almost as a protection from being affected by the truth. Two unseen women hissed, "pro-choisssssssse" as they quickly passed the table, while I was engaged in conversation with someone else. I always assume that these women are post-abortive and this brings up their suffering, so I pray silently for them.

Pro-lifers came up to greet me and exchange stories. I have prayed in front of abortion mills, but I missed the rescue movement, so my hat is off to those pro-life veterans. It was great to know they are out there, but unfortunately, they are a graying bunch. New leaders must come forward to take leadership positions in parish Respect Life Programs.

If you have ever considered leadership in the pro-life movement, there is most certainly a place for you. Participate in 20 days for life, and get in touch with your local Crisis Pregnancy Center. From folding baby clothes to manning pro-life tables, there is job for you. The babies are counting on you!

Thanks so much for this excellent reflection. I can certainly relate to the "quiet" at the pro-life" booth. You have given wonderful suggestions for people to help the precious unborn babies who have no voices to ask for themselves. Thank you!
God bless,
Donna

I neglected to mention in my first comment that your teen story is very beautiful - we need to pray for teens, not just say we will, and know we should, but PRAY for them to remain chaste in this difficult world!

What a nice story. Thank you for sharing.