Excellent Caucus analysis on "The World Over" 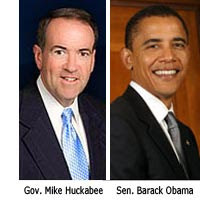 Raymond Arroyo's coverage of the Iowa Caucuses with guest Terry Jeffrey, former campaign manager for Patrick Buchanan, and editor of Human Events, was excellent. They analyzed Huckabee's win in terms of values voters, Evangelical voters and possible Catholic voters. Terry Jeffrey said unequivocally, "Catholics in states like Pennysylvania, Ohio, Missouri and Michigan will decide this election".
He attributed Huck's success to his pro-life and pro-family stand, and his religious faith, which he is bold in proclaiming. Rev. Huckabee started his career as a televangelist in Arkansas, and perhaps this explains his ease with the media, and his fearlessness in proclaiming his Christian faith. This resonates with social conservative voters, whom the Democratic Party completely snubs, and who feel ignored by their alleged champion, the Republican Party. Jeffrey stated that moral values and the Culture Wars are what will decide this election, NOT economics, or terrorism, or immigration. He feels that Catholics will vote for a moral conservative with fairly liberal economics, which is the way he describes Huckabee, whom he considers eminently electable.
The other candidates, from Guiliani who has lost the race, to MeCain, who wanted to yank the pro-life platform from the Republican Party in 2000, to Thompson, who after receiving the National Right to Life Party endorsement said he wouldn't vote to 'criminalize abortion for a girl, or her doctor', to Romney whose new-found pro-life position is not credible are not pro-life. The only pro-life candidate other than Huckabee is Ron Paul, whose stats didn't even make the radar screen in Iowa.
Terry Jeffrey stated twice that Barack Obama is THE most pro-abortion candidate ever to run for the presidency of the United States. He bases his claim on the following:
Jill Stanek, the nurse who witnessed late term abortions helped introduce a born alive infants protection act(babies accidentally born alive during abortions must be helped to live, and not neglected or deliberately killed) into the Illinois Legislature while Obama was there. He voted against the act, and then boxed it in committee where it died. The Born Alive Infant Protection Act passed unanimously in the US Senate, and overwhelmingly in the House,where not even NARAL had the guts to oppose it. President Bush signed it into laws.
Barack Obama's position on protecting newborn infants was more extreme than that of National Abortion Rights Action League(oops, they now like to be called,"Pro-choice America")
This election may just be a match between the most pro-life candidate and the most pro-abortion candidate. (hard as it is to believe that Hillary is relatively soft on abortion!)
If you missed this stimulating and informative discussion, it will be re-aired on Monday, January 7 at 11PM and Jan 8 at 1AM ET.
Posted by Leticia at 1/05/2008